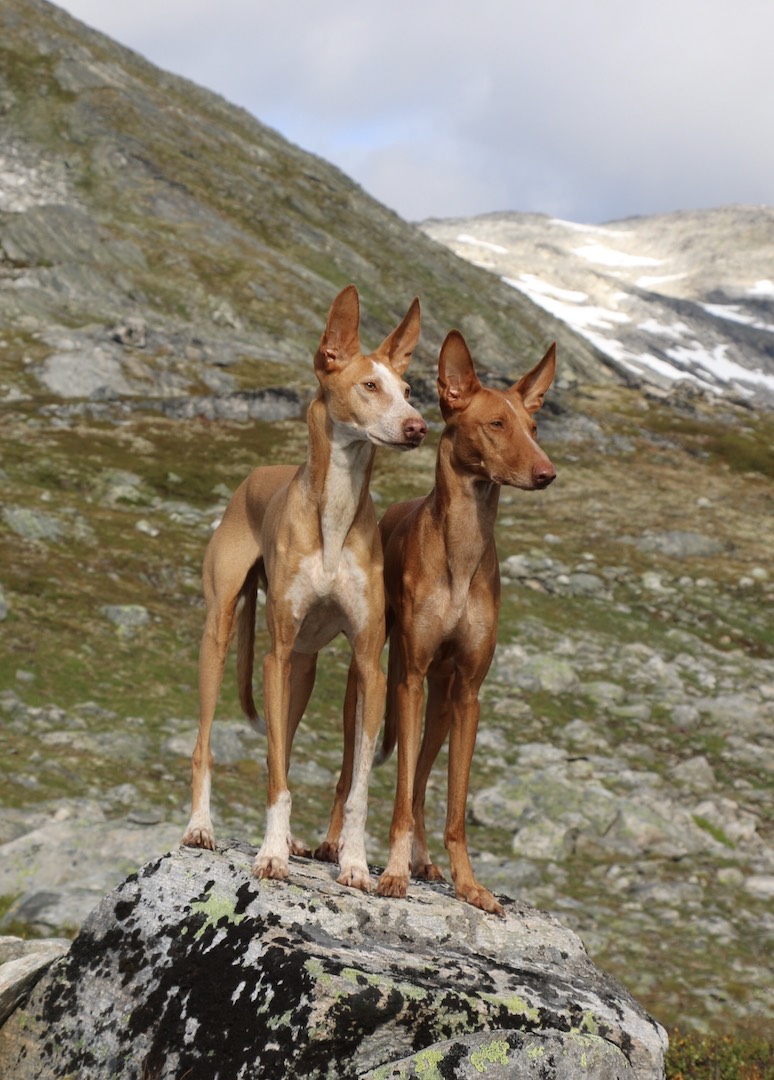 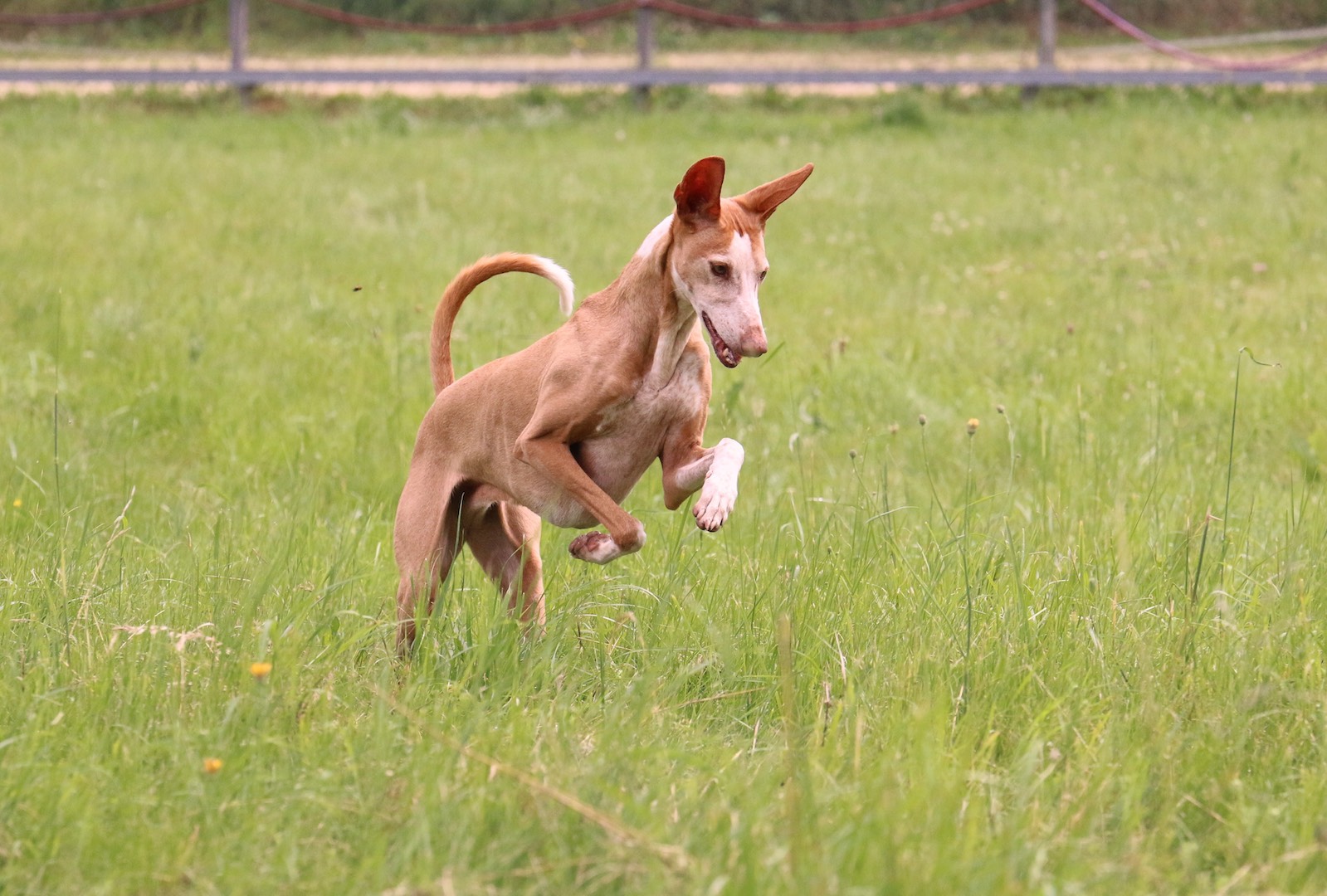 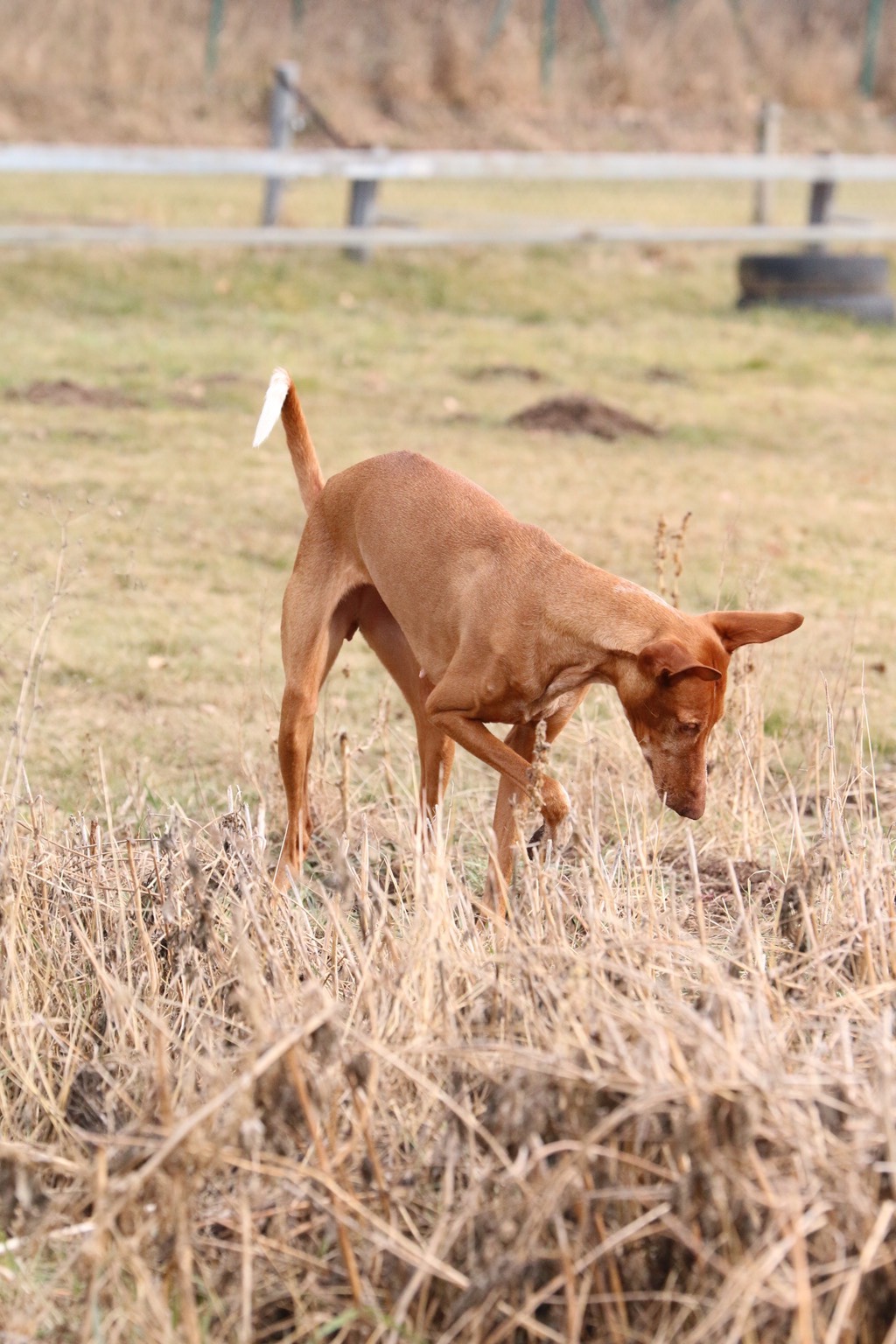 The Canarian hound is a slender and lightly built but sturdy dog, of medium size, with height at the withers approximately 55 to 64 cm (21.7 to 25.2 ins) for males, females are slightly smaller. Sizes vary with the terrain on which the dog hunts.[1] The short, dense coat should be some shade of red, white, or a combination of red and white, depending on the island and, in some cases, the specific area on some of the islands. There should be no other colour on the coat, or indeed anywhere on the body, as even the dog's nose, nails and skin should be a shade of red, and they are even known to "blush" when excited. The neck is long, the head is longer than it is wide, and the large ears are carried fully up. The long tail is usually seen low set but can be raised. The tail is not carried too high when moving. The dog should move in an extended and agile trot. Faults, which indicate that a particular dog should not be bred, include aspects of appearance as well as structural faults that would prevent the dog's ability to move and hunt, such as cow hocks, and crossing of the fore and hind legs at a trot. 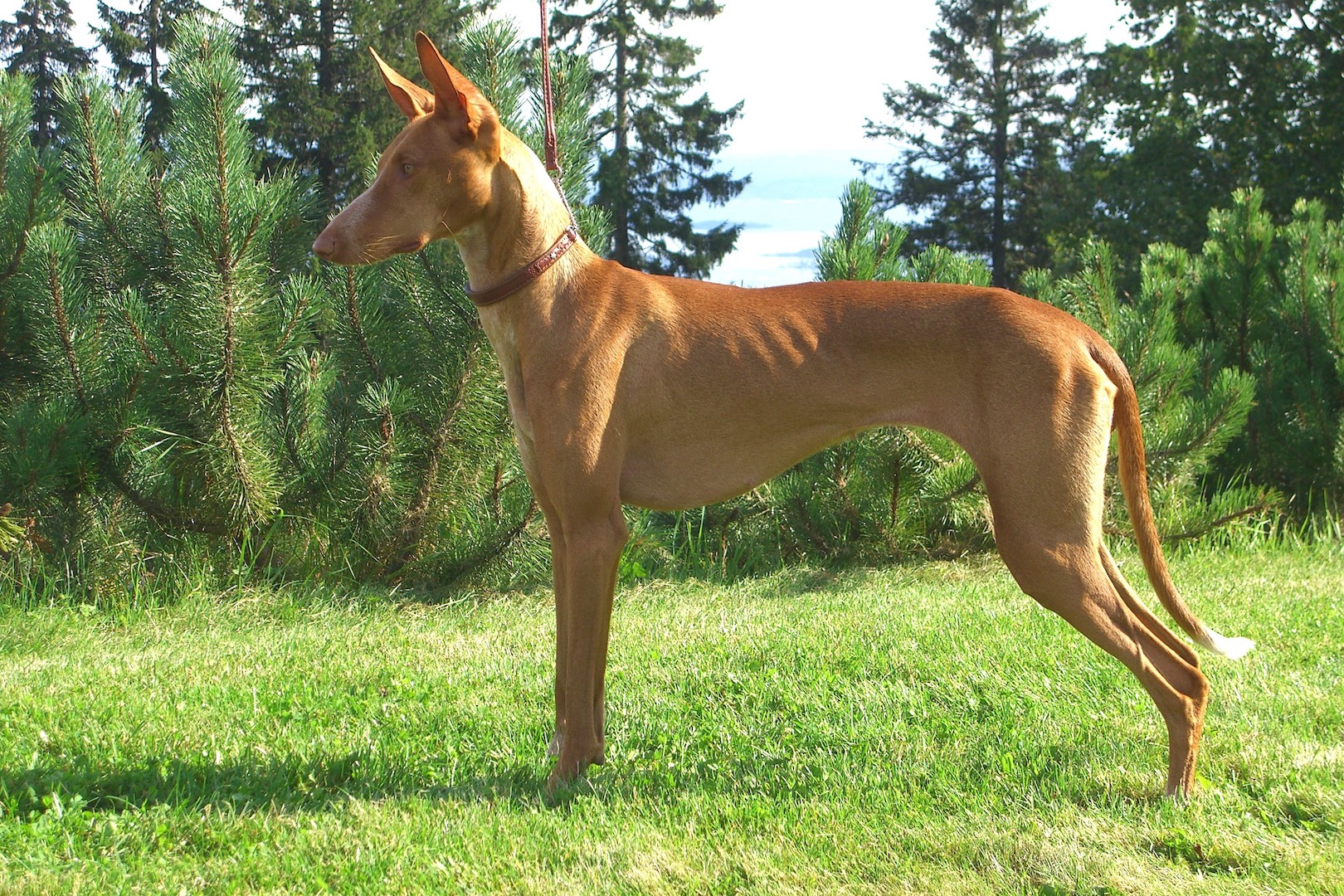 The Podenco Canario is found on all of the Canary Islands and has long been thought to descend from a very ancient type brought to the islands in antiquity, and isolated there, presumed to be an example of the very oldest breeds. It was thought to have originated in Egypt and North Africa, and brought to the Canaries by the very earliest human settlers on the islands.[2] Linguistic and genetic analyses of the descendants of the earliest known human inhabitants of the Canary Islands seem to indicate a common origin with the Berbers of northern Africa,[3] who may have brought the dogs there as a food source.[4] However, recent genetics studies have concluded that the Podenco is a type of dog more closely related to, and no more primitive than, the rest of the European hunting breeds.

Rabbits (Oryctolagus cuniculus) are a serious pest in the islands, where they were introduced (first on La Palma) in the 16th century. Rabbit hunting with the Podenco Canario is a very popular sport, and a necessary pest control, yet does little to currently significantly alter the rabbit population. Hunting seasons are organised to maximize rabbit control while minimizing any damage hunters and their dogs may do to agricultural areas[6] [1] The Podenco Canario is recognised by La Real Sociedad Canina de España (R.S.C.E., the Spanish Kennel Club) as an indigenous breed[7] and is recognised internationally by the Fédération Cynologique Internationale as breed number 329 in Group 5 Spitz and primitive types, Section 7 : Primitive type - Hunting Dogs, Spain. In North America the breed is listed with the United Kennel Club as a hunting dog in the Sighthound & Pariah Group. The breed is also recognized by a number of minor registries, hunting clubs, and internet-based dog registry businesses. Exported from its homeland, it is promoted as a rare breed for those seeking a unique pet. 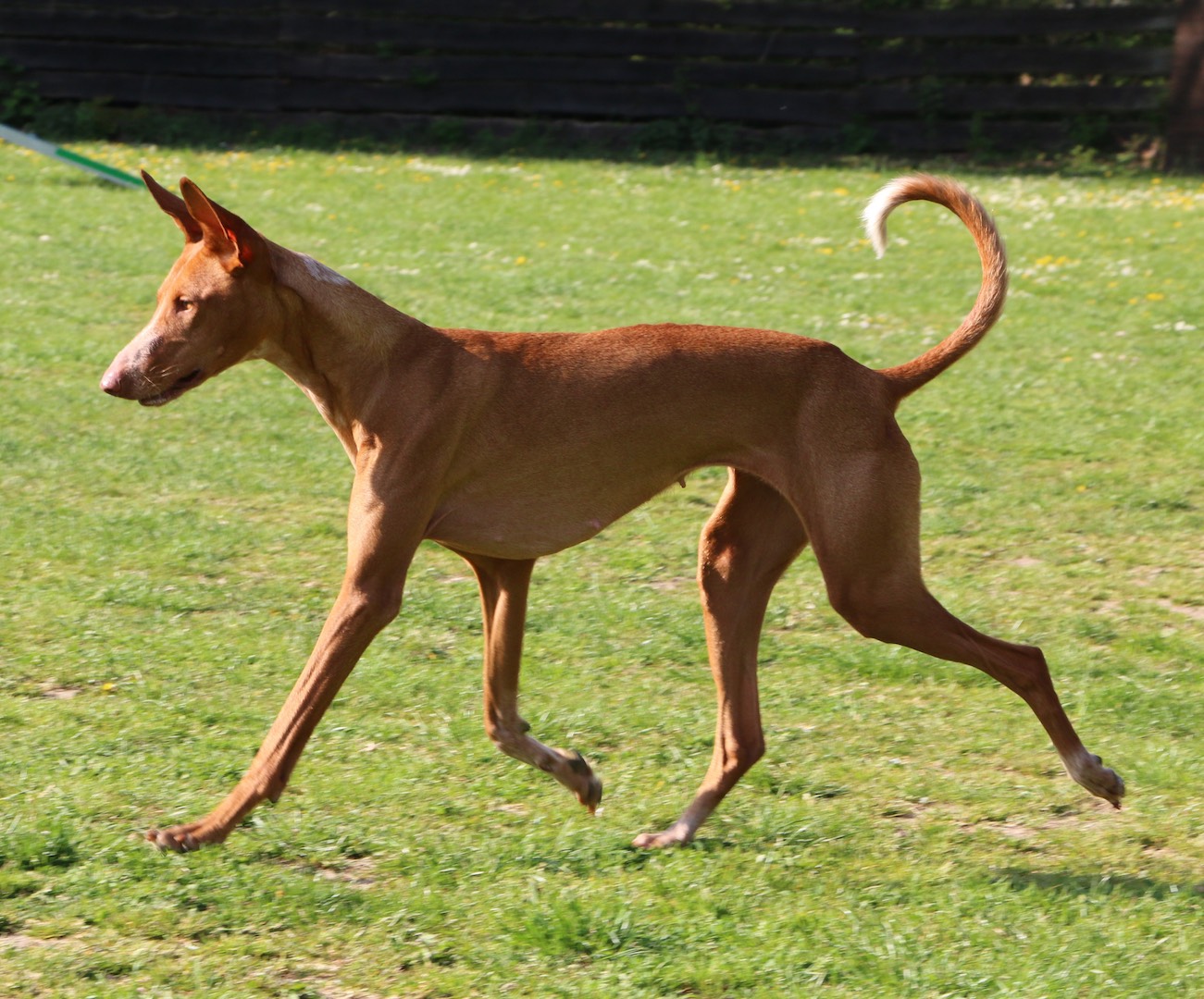 A very rare genetic disorder of sexual development has been observed in this breed, a testicular/ovotesticular disorder, which can result in dogs that are genetically female (XX) developing testes or ovotestes instead of ovaries. This disorder was formerly referred to as SRY-negative XX sex reversal, and is more commonly documented in American and English Cocker Spaniels.[8] The breed standard states that the typical behaviour is "nervy, agitated, and of an enthusiastic dynamism"[1] a typical high-key hunting dog. Dogs of this breed that are aggressive should not be bred, but there are many others that make wonderful pets, as they are notably loyal and gentle in a way that is similar to the Greyhound. 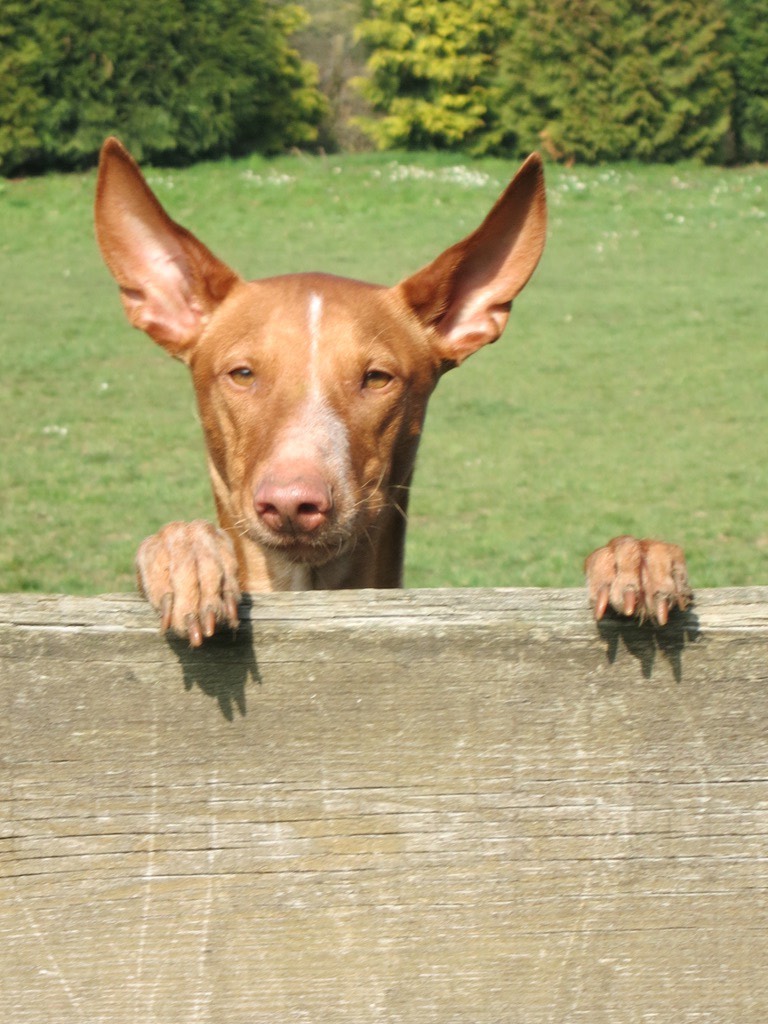